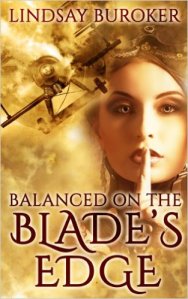 Colonel Ridge Zirkander isn’t the model of military professionalism—he has a tendency to say exactly what’s on his mind, and his record has enough demerits to wallpaper the hull of an airship—but as the best fighter pilot in the Iskandian army, he’s used to a little leniency from his superiors. Until he punches the wrong diplomat in the nose and finds himself issued new orders: take command of a remote prison mine in the inhospitable Ice Blades Mountains. Ridge has never been in charge of anything larger than a flier squadron—what’s he supposed to do with a frozen fortress full of murderers and rapists? Not to mention the strange woman who shows up right before he arrives…

Sardelle Terushan wakes from three hundred years in a mage stasis shelter, only to realize that she is the last of the Referatu, the sorcerers who once helped protect Iskandia from conquerors. Their subterranean mountain community was blown up in a treacherous sneak attack by soldiers who feared their power. Everyone Sardelle ever knew is dead, and the sentient soulblade she has been bonded to since her youth is buried in the core of the mountain. Further, what remains of her home has been infested by bloodthirsty miners commanded by the descendants of the very soldiers who destroyed her people.

Sardelle needs help to reach her soulblade—her only link to her past and her last friend in the world. Her only hope is to pretend she’s one of the prisoners while trying to gain the commander’s trust. But lying isn’t her specialty, especially when the world has changed so much in the intervening centuries, and if Colonel Zirkander figures out who she truly is, he’ll be duty-bound to sentence her to the only acceptable punishment for sorcerers: death.

I began this book with probably more excitement than I had ever begun a book before. I had been basically reading all Lindsay’s books that I could get my hands on. For me this was a new genre and I was loving it. I had been reading her books and posting reviews on Goodreads. One day I found in my inbox an email FROM THE AUTHOR!!! Whoohoo…this was completely new to me. She was willing to feed me free pre-release books as long as I would write an unbiased review and publish it on places such as Goodreads, Amazon, etc. Really! I get to do what I love more than anything else for FREE?!?! My response probably sounded a bit juvenile as I was seriously jumping up and down in my chair mentally.

Another thing you should probably understand is that I see authors as more than normal people. You see they are a set apart group of super-gifted and imaginative people who are mind-blowingly amazing to me. There is no way that these are normal people…nope. They are high on my pedestal. After all, they have been taking me to new lands, introducing me to new ideas, making my imagination soar for decades. Authors are better than Superman (although all four of my kids would say that no one can beat Captain America!)  So to have an email from an author…yup….wow! I know I know, I sound like I am twelve and I am far far removed from there but still…exciting.

I look back at my original review that I posted on Goodreads on April 3, 2014 and I am just really grateful that there is an edit feature. Not my best work ever but for the sake of “keeping it real” I am going to post the review as originally posted with only very minimal changes. Here goes:

Lindsay Buroker has done it again! I don’t know how she can write a mediocre book in two weeks let alone a great one but this is a GREAT one! I truly enjoyed this book.

As a pastor’s wife I always feel the need to specify a few things…this one has some sex in it folks. You don’t have to read the details…skip those portions. There is some bad language as well but it is relatively minor. Overall, I don’t feel compromised for having read the story.

I didn’t write much about the story. So to add a bit…I can tell you that if you like a quirky cast of characters dishing out quite a bit of ribald humor, a fantasy world where magical meets steam engines, a book where the action is fast paced and of the nature that you don’t want to set it down, then this is the book for you. I highly recommend it, but only for the grownups.

I received an advance review copy in exchange for my honest and unbiased review. My thanks to Lindsay Buroker.